How to Make Crema di Limoncello

What Is Crema di Limoncello

Crema di Limoncello is a lemon-based liqueur made from lemon zest, with milk and cream added. It's limoncello made with dairy added to the water in the simple syrup. You can find the answers to other common crema di limoncello questions here.

If you plan to make crema di limoncello (limoncello cream) at home and have never tried it before, you should read this very closely.

Cut a hole in the box. (Just kidding.) The first step is actually to select your lemons. Whenever possible, select organic lemons because it’s actually the skin (zest) you use in making crema di limoncello and that’s also where all the pesticides are.

Organic lemons also aren’t waxed, which is good because that's more crap that ends up in your liquor. Try to choose thick-skinned lemons with smooth skin.

The reason for this is that it’s a heck of a lot easier to zest a lemon with smooth skin. It saves a bit of time if you choose lemons without stickers on them too. 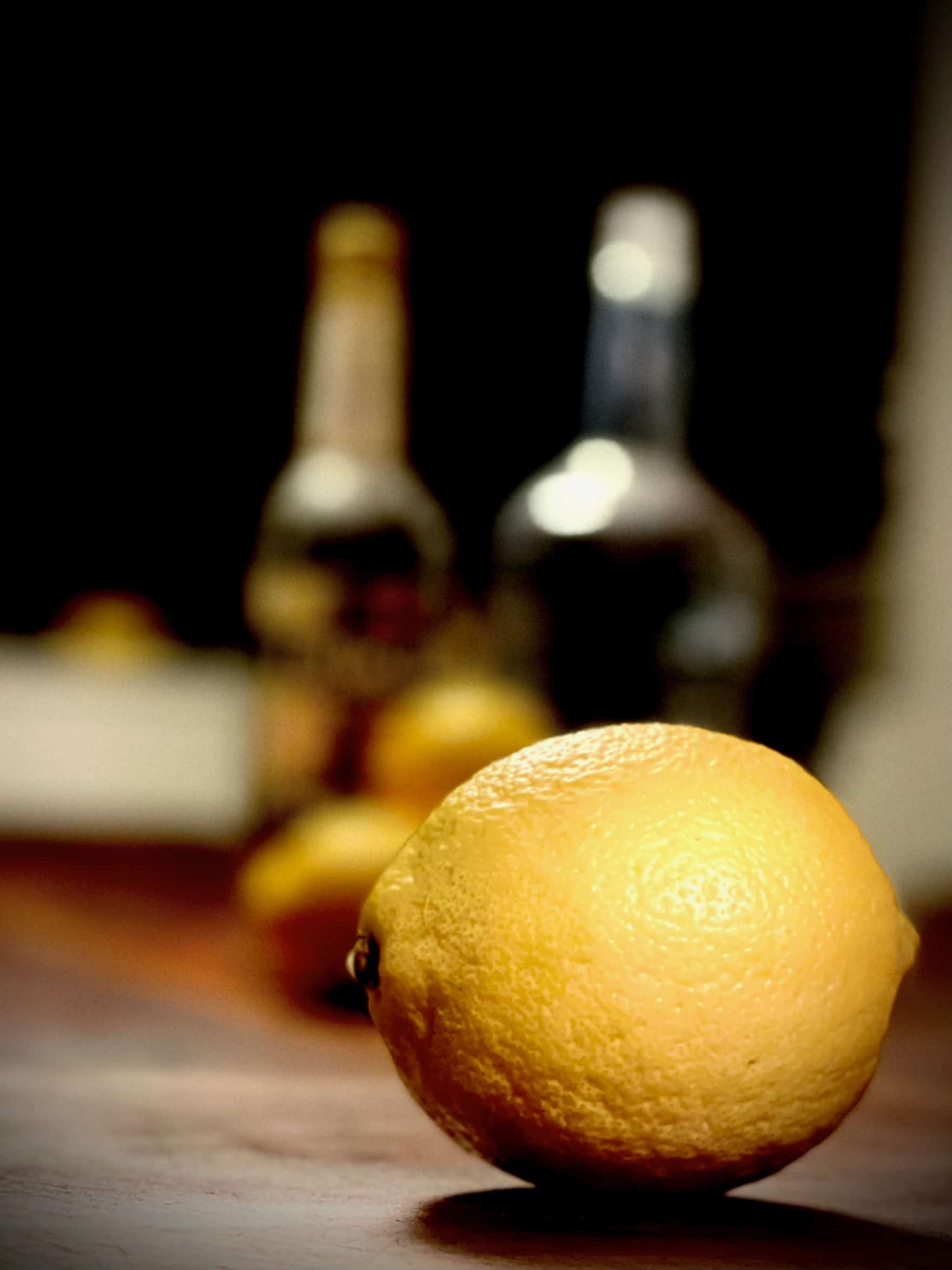 Wash the lemons. You’ll need to do this whether or not they are organic but if they aren’t organic it’s more of an ordeal. You need to scrub them under very warm water with a vegetable brush or some other plastic scrubber. Remove all stickers or stamps and as much of the wax as possible. Then dry them with a paper towel.

As an optional step, I like to also use a vegetable wash on the lemons to really get them squeaky clean and remove any wax or debris. It's an extra step, but worth doing in my opinion. I do this for any fruit or vegetable when I intend to eat the skin.

Zest the lemons. Doing this step quickly and doing it well requires a Microplane Zester because anything else just doesn’t work as well in my experience.

I like to put a cutting board or a large piece of parchment paper down to catch all the zest. Then you just use the zester to remove a thin layer of zest from the whole lemon. 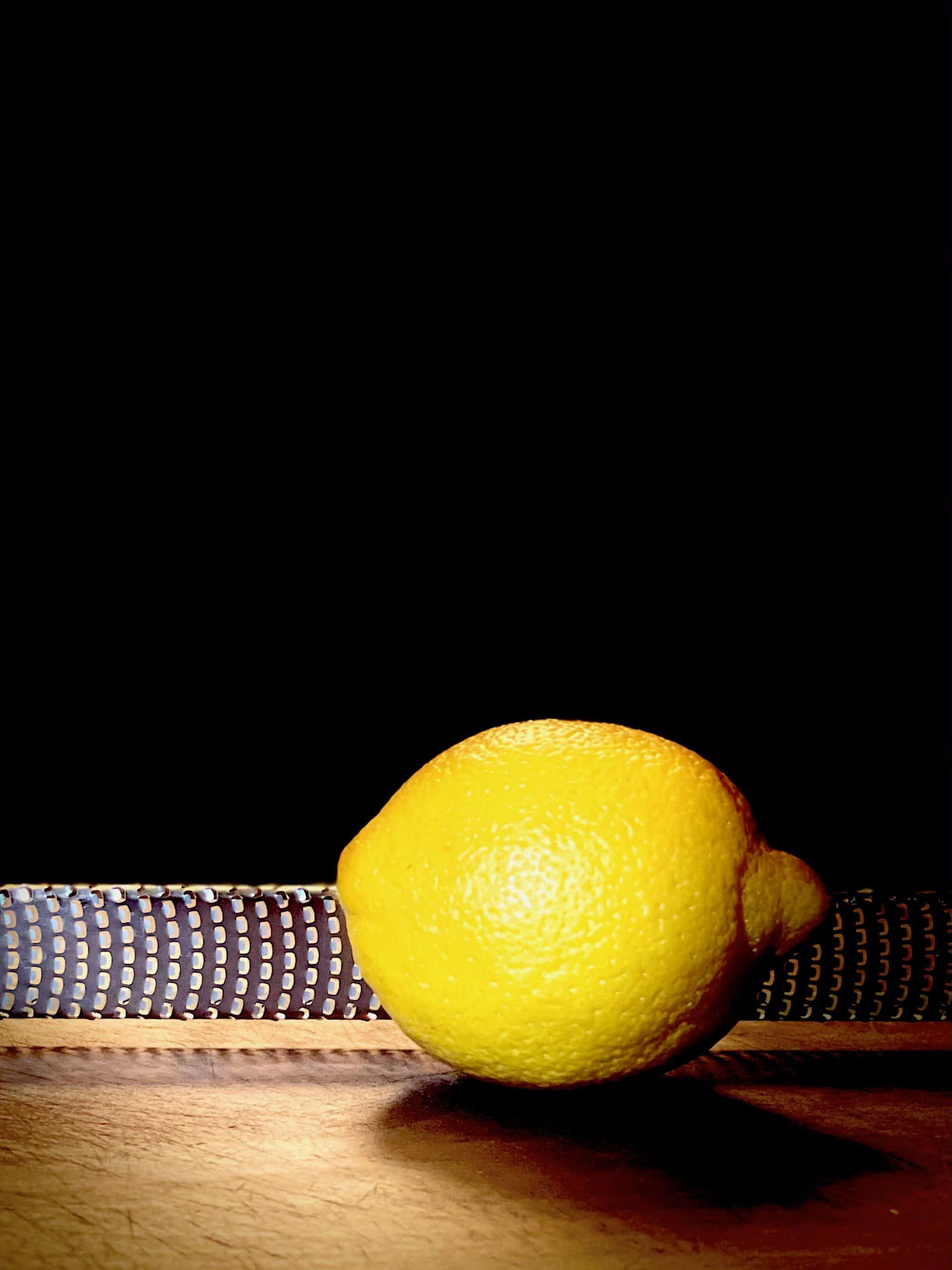 If you get even a little bit of the white pith just below the zest, it will make your liqueur bitter. So don’t take chances, if the lemon is bumpy and you can’t get all the zest without hitting the pith elsewhere, let it go.

The lemons in the picture below have been zested. Notice how it is still yellow because I just removed the outer skin without touching the pith anywhere. This step is all about quality over quantity. My recipe calls for more lemon zest than what you typically see (~25 grams of zest) because it is so important not to worry about not having enough zest here and digging into the lemon for more is not allowed.

This step used to take me a really long time when I used other types of zesters or peelers but with the Microplane I can zest all the lemons in under half an hour.

Filter the liquor. This can be done simultaneously with the zesting to save time. I use a Gray Kangaroo that I bought for this purpose, but any similar carbon filtration pitcher (like a Brita) will do.

I pour one bottle in, let it filter, pour it into a regular clean pitcher, then back in the top and I repeat the filtration four times for each bottle of liquor. 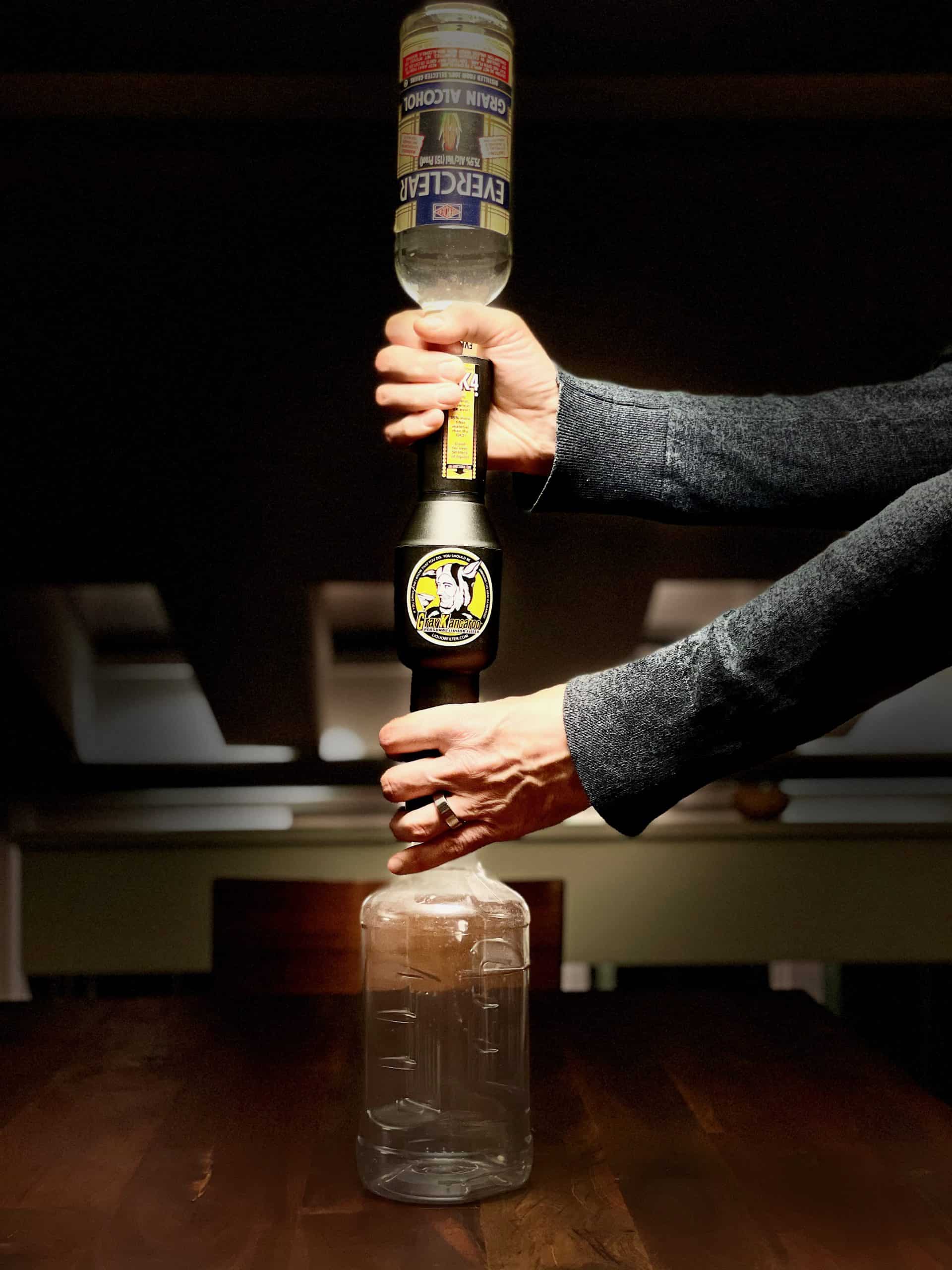 I’m still testing how worthwhile this is and how many filtrations are optimal but four is my current standard. I filter regardless of what kind of liquor I use.

If you’re using 151 proof grain alcohol like I do, then 750 ml is more than enough for most people. Better yet is to use my alcohol percentage calculator (which factors in the strength of your alcohol) and target 30% as the final alcohol percentage. Adjust from there to taste.

Combine the zest and the filtered liquor into a very clean one gallon glass jar and screw the lid on tight. If the lid isn’t tight enough, put a piece of plastic wrap on the top before screwing on the lid. You can use any glass jar of sufficient size and I have different ones for different purposes.

If you want to add the vanilla bean for extra flavor (I really like the flavor of vanilla, especially with cream) then now is the time. It needs to soak in the liquor as well. 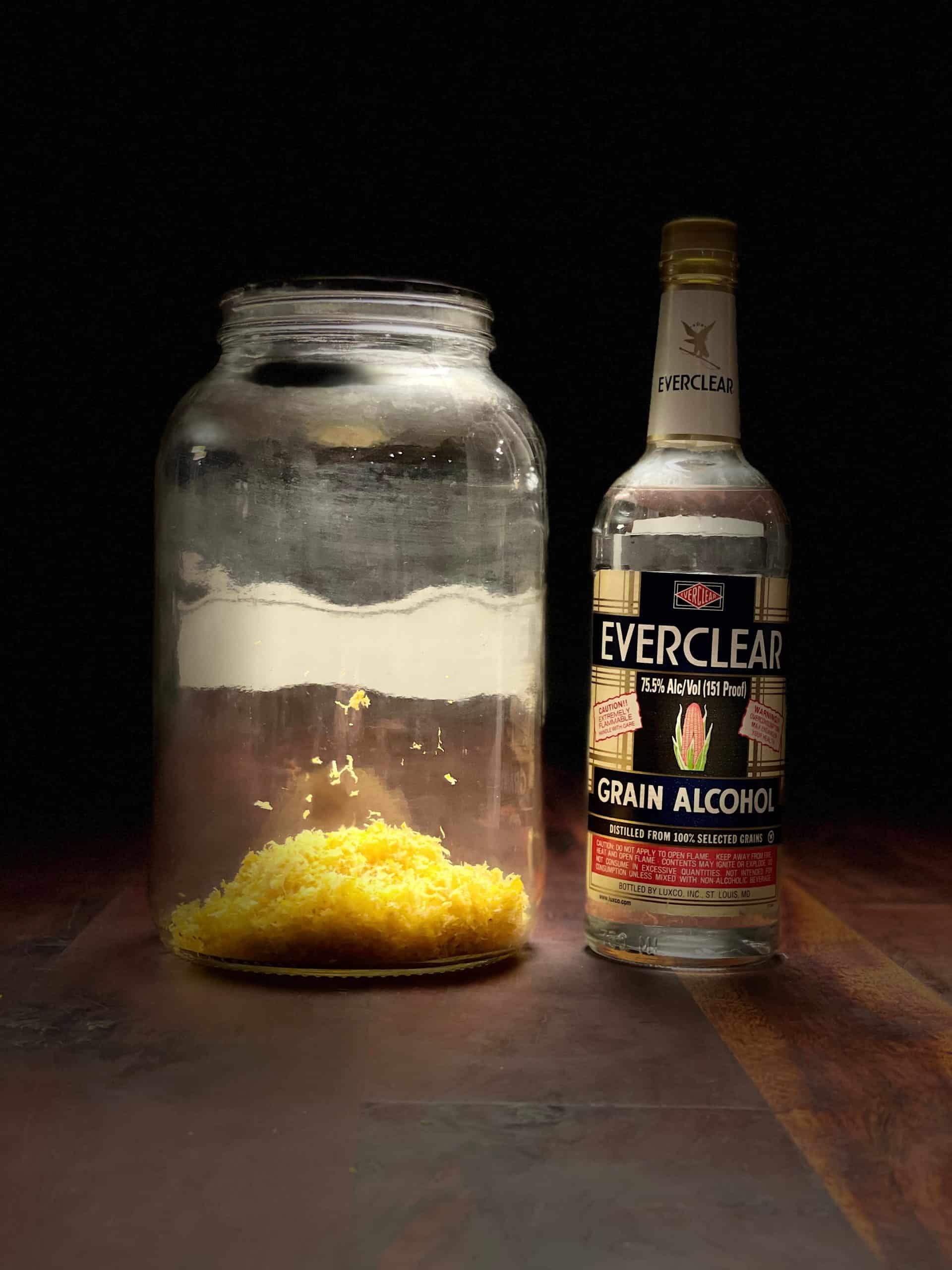 It’s easier to wait if you don’t see it sitting there all the time. I let the mixture sit and infuse for a minimum of 45 days, longer if I can stand it or if I forget about it.

This is where all of the lemon flavor comes from so don’t short-change yourself here. If you absolutely must have it sooner, reduce wait times from later steps first.

However, you should never skip it. I’ve skipped the filtration and the result resembles dirty bath water more than limoncello. The filtration actually gives it the color, clarity and flavor you expect. 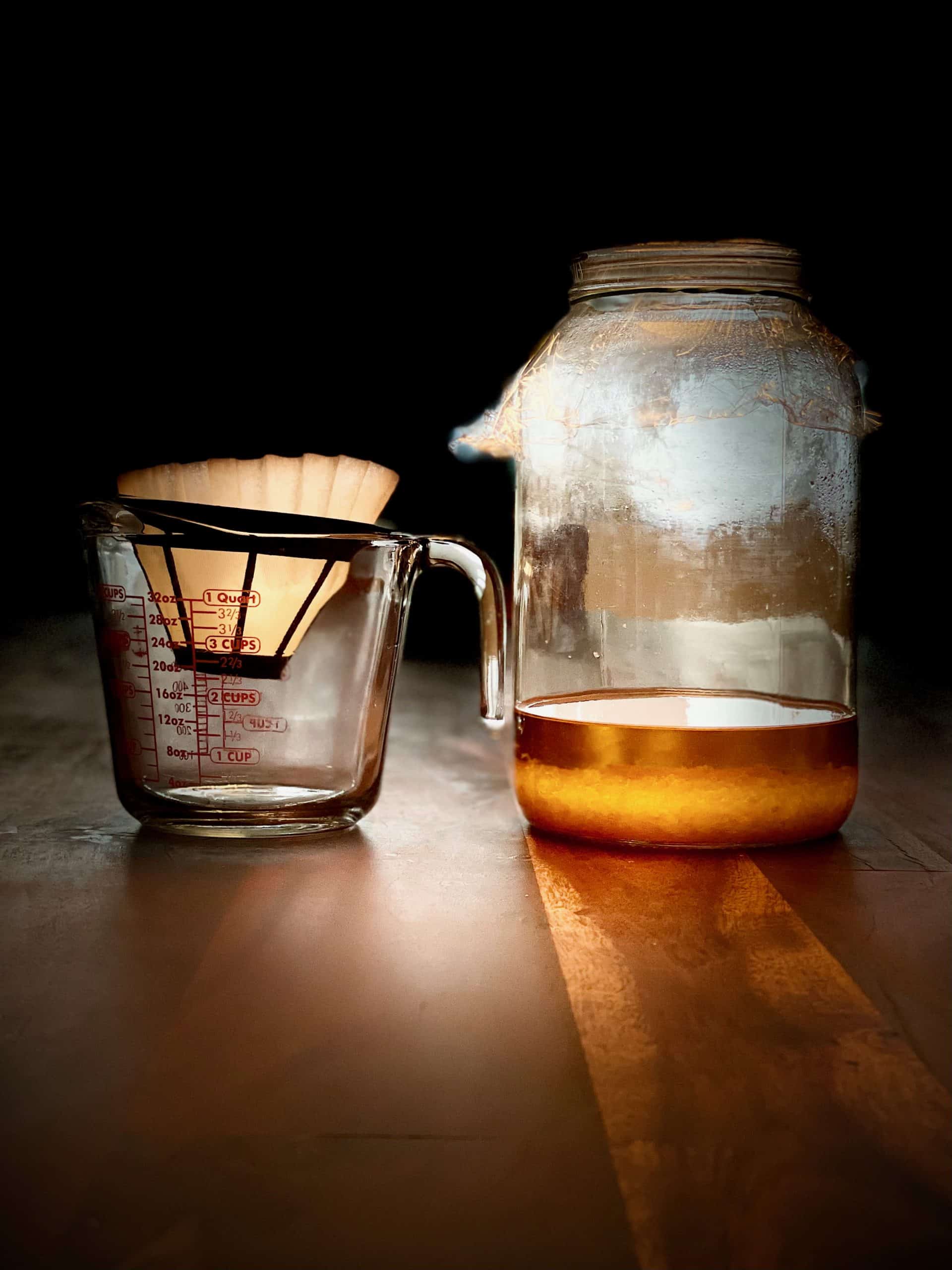 Add the simple syrup. My standard recipe is to bring 1 cup of 2% milk and 2 cups of heavy cream just to a boil and then remove it from the heat and stir in 1.75 cups of white sugar. Then let it sit until it comes down to room temperature.

I use organic dairy for this and I now always use regular white sugar. I don't attempt to calculate the exact proportions needed. I just make a bit too much and measure out what I need.

I’ve tried other types of sugar but raw sugars tend to have subtle flavors of their own (most notably molasses) that will show up in the final product. If that sounds ok to you, give it a whirl, but I didn’t like it. I’ve also heard that you should not stir the sugar but rather let the low boil mix the two instead.

I’ve tried it both ways and never noticed a difference. Once the simple syrup cools down (completely, to room temperature) you can just add it to the lemon/liquor infusion, screw the lid back on and shake the jar. Mark on the label the date you mixed the infusion with the simple syrup.

If you don't allow it to completely cool before adding the infused liquor, you may get "il collarino" or that scum that forms on top of the final product. 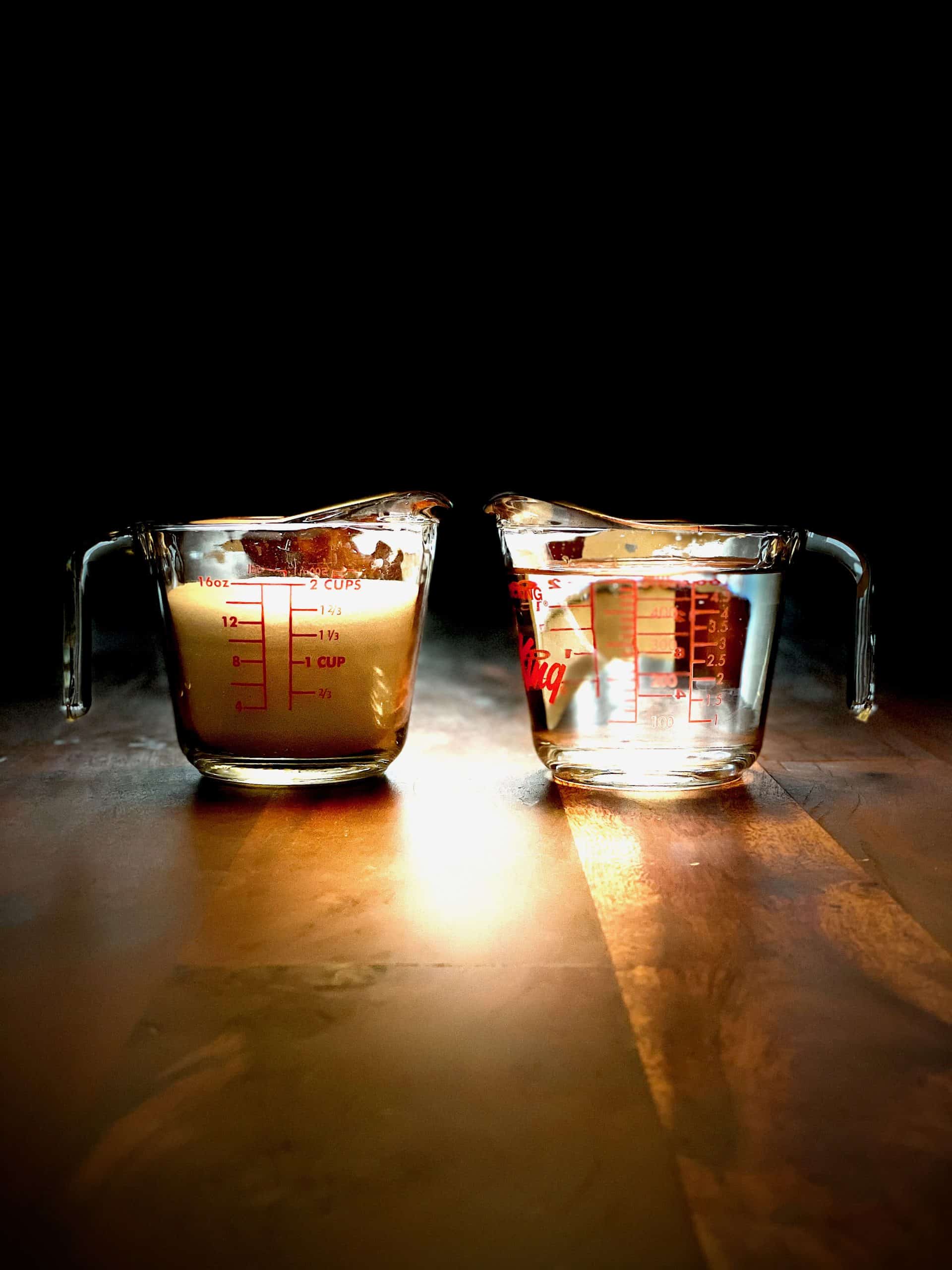 This isn’t really necessary for this purpose (like it is for beer) but it makes me feel like the bottles are clean enough. I often use either the bottles the liquor came in (if it’s for my own use) or some smaller and better-looking bottles (if I want to give them away). I have a very thorough post on choosing crema di limoncello bottles here. I also wrote a post on how best to find and apply the labels. You’re done! A few bonus tips for you though. In my experience the crema di limoncello mellows a lot in the first week. I realize this is torture but if you’re not in a tremendous hurry, I recommend doing the first tasting a week or so after bottling.

The longer it sits, the smoother it gets (within reason of course, the flavor can decline with age). This is more important if you’re making it with grain alcohol than vodka but it still holds true. I taste a given batch at one week, six months and one year of age. Never has a batch been around longer than that or I’d taste it at later intervals as well. Enjoy!

Do you mellow your finished product in the freezer or at room temp. It has dairy product and are worried it will spoil

You can do it at room temperature. If you go to a liquor store, you’ll see this sitting on the shelf for a long time. Alcohol and sugar are potent preservatives so it doesn’t spoil easily.

If adding vanilla beans to 1.75 L of Everclear and lemon zest, what type ( Madagascar, PNG, Tahitian, Mediterranean or Ugandan)of beans do you recommend and how many beans should you use? Also should the beans be split- exposing the beans?