The Downton Abbey - A Gin and Crema Di Limoncello Cocktail

Being a guy, I've never actually seen a whole episode of Downton Abbey. I've only walked through the living room on the way to the bathroom while it was on the TV. But in general, "actually knowing stuff" before you speak your mind isn't as popular as it used to be, so I went ahead and named this drink after the show.

That decision was based on the presence of gin in the ingredients and the way the image below came out. With the fancy tablecloth, indiscernable-but-upscale-looking bottle in the background, and of course the mini-goblet--the whole thing just smacks of aristocracy. This cocktail also contains Crema di Limoncello, or as we Yanks call it, Limoncello Cream. If you haven't yet used it, you'll find that it also somehow seems more refined than regular limoncello. Don't ask me how the addition of cow drippings achieves that feat, I can't explain it.

Here's a fun drinking game for Downton Abbey (and possibly the ONLY one in existence). Down one of these every time you hear the word "squiffy." 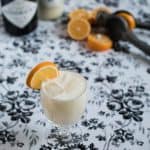