I get a number of questions from readers of the blog about crema di limoncello (limoncello cream), and they tend to be the same ones over and over. So I thought I'd just collect them all here and answer them all at once so I can just drop a link in the future.

A: Crema di limoncello is a liqueur made from the zest of lemons, sugar, milk and/or cream, and of course, alcohol. It's a traditional Italian liqueur that can be served straight up or mixed into a variety of delicious cocktails.

Q: How do you make crema di limoncello?

Q: What is the shelf life of crema di limoncello? How long does it last?

A: Crema di limoncello has a shelf life of 6 to 12 months. It should be kept in a cool place but does not require refrigeration. It contains milk/cream but it also has sugar and alcohol, which are potent preservatives. Therefore it is much more shelf stable than milk or cream alone.

Q: What do I do if my crema di limoncello is curdled?

A: If your crema di limoncello is curdled, throw it away. Exposure to air and heat over time will eventually cause it to go bad, and curdling is a sure sign that it's no longer suitable for drinking.

Q: How do I drink or serve crema di limoncello properly?

A: Crema di limoncello is delicious poured straight from the bottle, just like limoncello. It is typically served very cold (straight from the freezer) in small aperitif glasses or shot glasses. It also makes a great mixer for a variety of cocktails.

Q: Where can I buy crema di limoncello?

A: Crema di limoncello is not as common as regular limoncello, but it's typically available at most liquor stores that carry limoncello. You can also get it at Drizly if you don't want to get off the couch and/or don't want exposure to Coronavirus.

Q: What is the alcohol percentage of crema di limoncello?

Q: What cocktails can you make with crema di limoncello?

My Tour of Fabrizia Limoncello 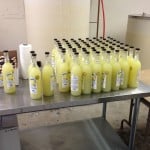 I was invited to tour the production facility of Fabrizia Limoncello recently, and I’d like to share the story in addition to the review. Reviewing Fabrizia actually prompted me to post an update to my commercial limoncello review page because there are a small number of very good commercial brands out there if you know where to look. As it turns out, the facility is only about a 30 minute drive from my house. I had no idea that commercial limoncello was produced in my area. I learned a lot, had a lot of fun and took a few pics for all you fellow limoncello lovers.

The owner of Fabrizia, Phil, and his operations manager Mike gave me a tour of the facility. That’s Phil in his office: 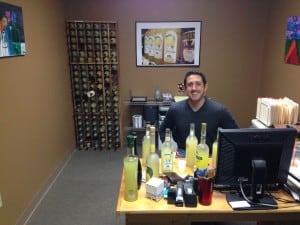 The facility itself was not huge, though this was limoncello production on a scale that I’ve definitely never seen before. The large barrels of alcohol at one end of the room added emphasis to that point. As you can see below, they are all grounded by wires so they don’t…you know…explode. It looks like a great backdrop for an episode of 24. 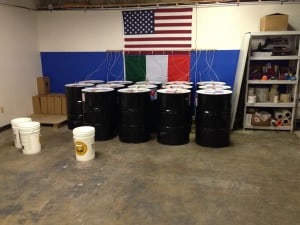 It’s a little strange to be that close to that much flammable material, but you get used to it quick. Especially when you see all the other neat stuff going on there. I took a look at their infusion process (more steeping peels than I’ve ever seen in one place) and their bottling process, complete with a bottling machine imported from Italy. 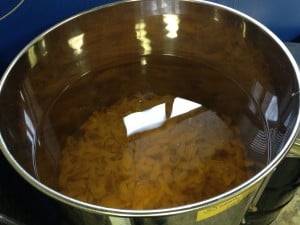 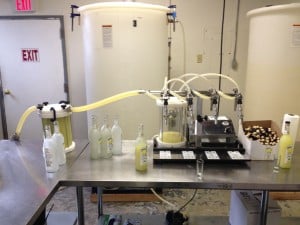 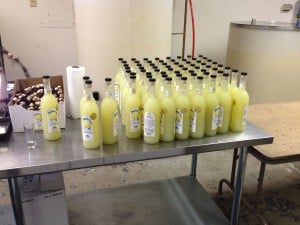 Phil started Fabrizia with no prior experience in the industry so he earned his entrepreneurial stripes the hard way. He has a real passion for creating the best product he can at a fair price and I think it shows in the limoncello. I learned a lot during this tour but I’ll boil it down to the lessons I think most readers can use, and this first one is money.

Quite by accident, Phil and Mike discovered that the real key to minimizing or eliminating the film that forms on top of the limoncello is to allow the simple syrup to completely cool before mixing it with the infused alcohol. Any heat in the simple syrup somehow separates some of the oils from the infusion and forms the film. How’s that for a useful tip!

As you can see from the pic below, Phil shares my interest in rigorous experimentation. He keeps samples from each of his batches for the long term. He said he disagrees with my recent post claiming that limoncello doesn’t go bad over time. He says that it retains peak flavor for about 8 months after production and then begins a slow decline. My one-off observation really doesn’t compare to his wall of evidence so I have to concede that point. I think “going bad” is the wrong description on my part though. Drinking old limoncello is still better than most things that can happen to you, but you can see from the color of the liqueur that it is losing something over time and a tasting on the spot confirmed it.

Another tasting we conducted at Fabrizia was of their new Blood Orange liqueur. I’ve made batches with various flavors and blood orange has long been my favorite non-lemon variety. I haven’t made a batch like that in a long time so I don’t have a reference point, but Fabrizia’s blood orange is a very tasty liqueur.

A huge thanks to Phil and Mike at Fabrizia for their hospitality! 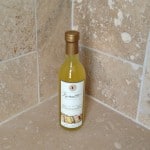 I just posted another commercial limoncello review, check it out! As an update, I’ve been asked this a few times and I don’t think Rometti is producing limoncello any longer. If they are I can’t find any evidence of it.